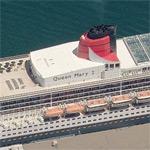 At the time of her construction in 2003 by the Chantiers de l'Atlantique, the Queen Mary 2 was the longest, widest and tallest passenger ship ever built, and at gross tonnage (GT) of 148,528 tons, was also the largest. She lost the gross tonnage distinction to Royal Caribbean International's 154,407 GT Freedom of the Seas in April 2006
Links: en.wikipedia.org
1,989 views