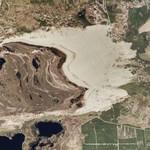 In northern Jutland in the 16th and 17th centuries shifting dunes were a problem for the population: huge dunes, some stretching up to 7 km (4 mi) inland drove them back from the coastal areas, but in the 19th century the government acted to alleviate the problem. The Sand Drift Act of 1857 allowed the state to buy or expropriate areas of sand drift, and a further Act in 1857 allowed the purchase of areas adjacent to the drifts. Dune grasses and conifers were planted to stabilize the sands and these plantations became common after 1880. Although barren, the dune zone allowed limited sheep farming and some inshore fishing. By the 1950s the dune drifts were under control.
Links: en.wikipedia.org
563 views