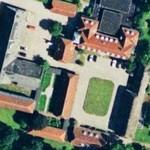 He worked a lifetime for the development and maintenance of the Danish language and Danish culture in South Jutland. Through life he achieved to become a priest, politician, teacher and high school principal. He founded Rødding High School and published the newspaper Dannevirke, a local paper for the Danish minded people in southern Denmark and northern Prussia. After the danish reunion it continued until 1972 when it was taken over by the local newspaper Jydske Tidende.
Links: da.wikipedia.org
382 views