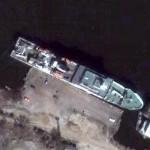 Keldysh was involved in the search for Soviet submarine K-278 Komsomolets, lost off the southeastern coast of Norway in 1989 after fire broke out on board. In addition to its nuclear reactor's core material, the submarine was carrying two nuclear torpedoes. Concern over the potential effects of the high-energy nuclear material on the rich fishing areas in which it lay prompted an effort to locate the sub's wreckage and ascertain its condition. Two months after the sinking, Keldysh located the wreckage of K-278 in June 1989 and Soviet governmental representatives labeled the risk of leaks to be "insignificant." Nevertheless, Keldysh mounted two expeditions to the wreck of K-278 (1994 and 1996) to seal fractures in the sub's hull.

Among recent voyages, the Keldysh has made expeditions to two famous wrecks, the British liner Titanic and the German battleship Bismarck. Filmmaker James Cameron led two of those expeditions: to the Titanic in 1996, leaving Kaliningrad in August, (reported in his television special Ghosts of the Abyss) then to the Bismarck in 2002 (reported in Expedition: Bismarck). In 1996 Cameron filmed the modern-day scenes for his film Titanic using the Keldysh. Ten years later, Cameron used the Keldysh to film his latest movie Aliens of the Deep.
Links: en.wikipedia.org
697 views