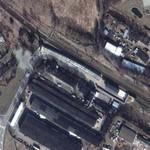 By Dania @ 2009-06-07 23:50:11
@ 51.801873, 19.48017
Lodz, Poland (PL)
Radegast is a former railway station in Łódź, Poland. During World War II, in the course of the Holocaust, the station, located at the time near the boundary of the Łódź Ghetto, was the place where Jewish and other inhabitants of Łódź were gathered for transport out of the Ghetto and the city to the Kulmhof and Auschwitz death camps. About 150,000 Jews passed through the station on the way to their deaths in the period from 16 January, 1942 to August 29, 1944. The station thus had the same significance for Łódź as the better known Umschlagplatz had for Warsaw.

August 2008, US talk host Jerry Springer appeared in the british genealogical documentary series "Who do you think you are" to search for the life of his ancestors. He found out that his grand mother, her sister and brother in law were transported to Chelmno Extermination Camp in 1942 from this station after having stayed in the Ghetto of Łódź in a small room for 6 months without kitchen, running water, toilette and furnitures.