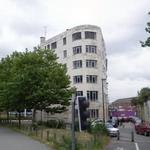 By adrbr @ 2010-11-06 15:46:54
@ 51.449157, -2.586038
Bristol, United Kingdom (GB)
Radio On is a film directed by Christopher Petit and released in 1979. It is a rare example of a British road movie, shot in black and white and featuring music from a number of New Wave bands from the time, as well as established artists such as Kraftwerk and David Bowie. It is a grim but fascinating journey through late seventies Britain by way of a road trip from London to Bristol, with Robert a DJ (played by David Beames) attempting to investigate the suicide of his brother. David Beames's character is a disc jockey at a radio station based on the United Biscuits Network, which broadcast to factories owned by United Biscuits.