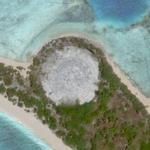 By AlejoHausner @ 2006-06-20 16:01:29
@ 11.552269, 162.347159
Marshall Islands (MH)
Cactus crater on Runit island, part of the Enewetok atoll, in the Marshall Islands. Radioactive debris from many nuclear bomb tests was dumped into this crater, which was capped with 18-inch-thick concrete panels in 1982. Soil from many of the contaminated islands was scraped off. The original inhabitants of the atoll were allowed to return in 1980, despite radioactive elements like Cesium 137 in the ecosystem.
Links: eed.llnl.gov, www.artificialowl.net, www.atlasobscura.com, www.theguardian.com
3,738 views