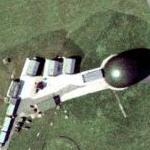 The official RAF descriptions states that RAF Staxton Wold has been used as an early warning station since the 3rd Century AD, when it was the site of a warning beacon. It was first used as a radar station in 1937, when it was set up as part of the Chain Home system. It is the only one of the original stations still in use, and may thus claim to be the oldest continuously serving radar station. Today it is a Reporting Post for British air defence and surveillance.
Links: en.wikipedia.org
5,044 views