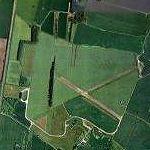 
TEMPSFORD. (BEDS.) KEPT ONE OF THE WAR'S BIGGEST SECRETS.

FLY BY NIGHTS BEAT THE GESTAPO.

Tempsford is just a hamlet in rural Bedfordshire. Its inhabitants mostly work on the land, and none of them knew it but Tempsford held one of the big secrets of the war.

They knew that down a little side road marked 'This road is closed to the Public' there was an R.A.F. Station. In the Anchor and the Wheatsheaf they saw the R.A.F. men but that was all. They had no idea of the job that they were engaged on.
Links: www.harringtonmuseum.org.uk
1,135 views