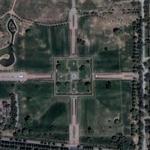 By adrbr @ 2010-03-03 14:23:15
@ 28.640562, 77.249363
New Delhi, India (IN)
The memorial has the epitaph Hē Ram, (literally 'O' Ram', but also translated to 'O God'), believed to be the last words uttered by Gandhi. The memorial was designed by Vanu G. Bhuta. It was originally designed to reflect the simplicity of Mahatma Gandhi's life. The design that won the government of India invitational competition had the black marble slab surrounded by red earth as none of Gandhiji's ashram residences had any "English lawn". The memorial has gone through a number of design changes since then, a few at the behest of Jawaharlal Nehru, the first Prime Minister of independent India.

In recent years, it has become customary for foreign dignitaries visiting India to pay their respects to Gandhi at the Raj Ghat by laying flowers or wreaths on the platform. As a sign of respect, visitors are required to remove footwear before approaching the memorial. A commemorative ceremony is held every Friday. Prayer sessions are held at the Raj Ghat on Gandhi's birth and death anniversaries.
Links: en.wikipedia.org
452 views