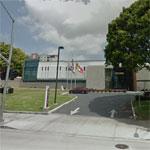 By jbottero @ 2013-02-07 18:18:31
@ 34.056245, -118.267309
Los Angeles, California (CA), US
The Rampart Division of the Los Angeles Police Department serves communities to the west and northwest of Downtown Los Angeles including Echo Park, Pico-Union and Westlake, all together designated as the Rampart patrol area. Its name is derived from Rampart Boulevard, one of the principal thoroughfares in its patrol area. The station house was located at 2710 West Temple Street in Westlake. It has since moved east into a newly constructed facility at 1401 West 6th Street, the site of the former emergency receiving hospital. With 375,000 residents occupying a 7.9-square-mile (20 km2) area, Rampart is Los Angeles's most densely populated community.
Links: en.wikipedia.org
1,003 views