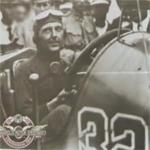 Harroun was the only competitor to drive solo, as every other car utilized a riding mechanic. Without a second set of eyes to help him, his car featured the first known use of a rear view mirror mounted on an automobile.

Tire wear was an issue in the race, and since the wheels were not removable, installing new tires took several minutes. Harroun intentionally drove a slower pace than his competition, which increased the life of his tires and kept him from making as many slow pit stops. He led 88 of the 200 laps.