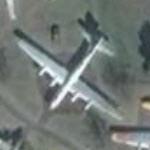 By kjfitz @ 2007-03-10 15:52:48
@ 37.365254, -120.578594
Atwater, California (CA), US
The Boeing B-29 Superfortress is the first of the true "Heavy Bombers". It was designed as a replacement for the B-17 and B-24. It was the first pressurized bomber and it differed from its predecessors by the use of remotely controlled turrets for its machine guns. Development problems delayed its introduction to combat service. Although it made its first flight in September, 1942, the first B-29 combat missions against Japan did not come until June 15, 1944. A total of 3,967 were built by Boeing in Wichita, KS and Renton, WA and by Glenn L. Martin Co. in Omaha, NE and Bell Aircraft Co. in Marietta, GA.

The Superfortress was used almost exclusively in the Pacific theater of World War II, and caused much destruction against the Japanese home islands. The B-29's "Enola Gay" and "Bock's Car", became the only two aircraft to drop atomic weapons during wartime. This occurred in August of 1945, thus bringing the Japanese to surrender in September of that year. B-29s also served during the Korean War, flying 21,328 sorties from bases on Honshu and Okinawa and dropping over 167,000 tons of bombs from 1950 to 1953. At the beginning of that war they flew daylight missions but, after the introduction of the Mig 15, the B-29s operated at night. The undersurfaces of the airplane were painted gloss black at that time.