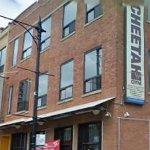 By WacoKidd110 @ 2011-04-15 20:11:09
@ 41.910479, -87.67626
Chicago, Illinois (IL), US
The cast resided in a loft at 1934 W. North Avenue in the Chicago neighborhood of Wicker Park, which had formerly served as a sweatshop, storage facility, and, after falling into disrepair in the 1980s, a drug den. After it was renovated, it served as a hipster cafe and an antique shop. Chicago Scenic Studios constructed the loft's interior, and interior decorating was overseen by local designer Suhail. After filming, fixtures and other items used during the production were auctioned off, and the space was converted into a Cheetah Gym, which opened in 2002
Links: en.wikipedia.org
829 views