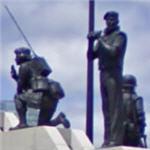 By kjfitz @ 2009-10-07 10:35:21
@ 45.428542, -75.696637
Ottawa, Canada (CA)
The Peacekeeping Monument is a monument in Ottawa, the capital of Canada, commemorating Canada's role in international peacekeeping and the soldiers who have participated and are currently participating, both living and dead.

The work, entitled Reconciliation, depicts three peacekeeping soldiers — two men and a woman — standing on two ridges of stone which cut through the broken debris of war and converge at a high point, which symbolizes the resolution which peacekeeping brings. The base of the monument includes Lester Pearson's 1956 quote We need action not only to end the fighting but to make the peace... My own government would be glad to recommend Canadian participation in such a United Nations force, a truly international peace and police force, as well as the French translation.

In 1995, the Monument was commemorated on the year's $1 coin, following the 1994 commemoration of the National War Memorial.
Links: en.wikipedia.org
721 views