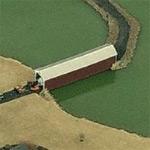 In 1994, the bridge was moved again, this time to the farm of the elder Mr. Anderson. His ancestors had originally built the bridge.
Links: www.dalejtravis.com
482 views