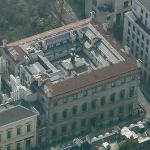 The club has been used as a filming location for a number of movies, including the James Bond films "Die Another Day" and "Quantum of Solace".
Links: en.wikipedia.org, virtualglobetrotting.com
372 views