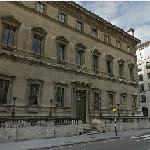 The club is used fictionally in Jules Verne's Around the World in Eighty Days; the protagonist, Phileas Fogg, is a member of the Reform Club who sets out to circumnavigate the world on a bet from his fellow members, beginning and ending at the club.