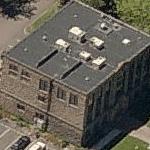 By kkeps @ 2008-11-12 15:30:21
@ 44.055347, -121.317064
Bend, Oregon (OR), US
This building was Bend’s first modern school and was known for its architecture and advanced mechanical systems. The building was built of locally quarried volcanic tuff and was widely admired as a marvel of masonry. The building is named for its first principal, Miss Ruth Reid, who was a progressive leader in the educational issues of her time. The school played a part in education in Bend for 65 years. In 1979, the title for the building was transfered from the school district to Deschutes County. Following refurbishment the building opened as the Deschutes County Historical Society Museum.
Links: www.waymarking.com
745 views