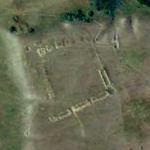 By kjfitz @ 2010-11-24 16:34:07
@ 45.314615, -107.908745
Fort Smith, Montana (MT), US
Fort C. F. Smith was a military post established in the Powder River country by the United States Army in Montana Territory on August 12, 1866, during Red Cloud's War. Established by order of Col. Henry B. Carrington, it was one of three forts (along with Fort Phil Kearny and Fort Reno) that was intended to protect travelers on the Bozeman Trail, which connected the Montana gold fields with the Oregon Trail.

Originally named Fort Ransom, the post was renamed in commemoration of Gen. Charles Ferguson Smith. It included a 125-foot square stockade made of adobe and wood for protection, with bastions for concentrated defense. Two companies of the 18th Infantry Regiment (approximately 90-100 officers and men) were stationed at Fort Smith during 1866, and during 1867 the garrison consisted of 400 men of the 27th Infantry.

A large Sioux party unsuccessfully attacked haycutters guarded by 20 soldiers near the Fort in the Hayfield Fight in 1867. The Army abandoned Fort C.F. Smith as a condition of the Fort Laramie Treaty of 1868.

The site of the fort is located on private land, on what is today the Crow Indian Reservation. It is just outside the town of Fort Smith, Montana. Since most of the fort's buildings were made of adobe, as of 2010 the foundations of the structures can still be seen as low mounds rising a foot or two off the pasture. By looking carefully, the arrangement of buildings around the perimeter of the old parade ground can be discerned. A stone monument in the approximate center of the parade ground (placed in the 1930s) commemorates the fort. A wooden sign, in poor repair, marks the Bozeman Trail.
Links: en.wikipedia.org
1,272 views