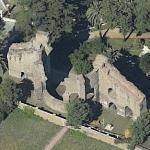 Various parts of the imperial palace, which was enlarged upon by the Emperor Constantine and his wife, Elena, remain including parts of the walls, part of the imposing apse which formed the basilica and various "domus" (houses) which were probably used by the courtiers as palace residences. Several splendid black and white mosaics, laid as paving, have been found in these houses while in one particular house colourful wall frescoes have been recently excavated.
612 views