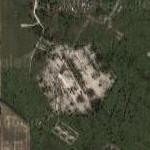 The date of construction of Newport NOLF has not been determined, but the earliest depiction of the field which has been located was a 1942 map (courtesy of the NAS Grosse Isle web site), which labeled it as "Newport Field "23813".

Most of Grosse Isle's cadets solo flights were conducted from Newport.