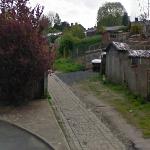 The tramway closed in 1934. It is estimated that the service had traveled over 4,582,000 miles and carried about 57.5 million passengers during the years it was active.

In this view you can see the old single rail going up towards the Trawden terminus. This section of the old tramway has become a footpath.
Links: en.wikipedia.org
382 views