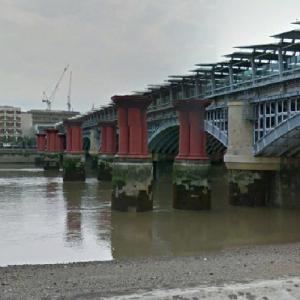 By Drudii @ 2017-03-18 08:00:14
@ 51.5085186, -0.1039059
City Of London, United Kingdom (GB)
Blackfriars Railway Bridge is a railway bridge in London crossing the River Thames and is located between Blackfriars Bridge and the Millennium Bridge. The original bridge was constructed in 1864. The bridge had massive abutments at each end and solid columns standing in the River Thames. The modern bridge was built right beside the original in 1886 and originally called St. Paul's Railway Bridge. As the rail traffic increased in London, the original bridge was too weak for the modern trains and eventually removed in 1985.

The original bridge columns still remain today and are located right beside the current bridge. The abutment on the southern side remains and is listed as a Grade II listed structure.
Links: en.wikipedia.org
364 views