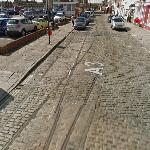 Later on trolleybuses would replace the trams for the first time on the Soutn Parade Pier to Cosham route on the 4th August 1934 this was then followed by replacement of the trams on other routes too. Portsmouth Corporation Transport continued to operate the trolleybuses until 27 July 1963, after which it continued as a bus operator until 1988, when it was privatised.

The original trams and trolleybuses can be seen in different transport museums around Britain. Small sections of the original track can also still be seen embedded in the road.
Links: en.wikipedia.org
434 views