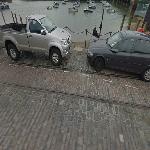 The tramway closed during the First World War as the military needed the horses for military usage, but the tram service later reopened after First World War and closed again in 1921.
Links: en.wikipedia.org
268 views