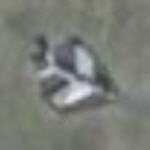 Approximately 700 of the F-84's that were produced were flown as reconnaissance versions of the aircraft. For a time, F-84F's were considered for use as parasite fighters for the B-36 Peacemaker. They would have been attached to the wingtips of the B-36 and could have separated to fly escort. This would have been necessary because the B-36's range was beyond any fighter aircraft. The plan was tested, but never implemented.

The aircraft on display at Castle was delivered to the U.S. Air Force in November 1954 and served with the Strategic Air Command until 1957. It was then transferred to the Tactical Air Command and later to the Air National Guard. For a time, it was stationed in France with the U.S. Air Forces in Europe. The last Guard F-84Fs were retired in 1971.
Links: www.elite.net
714 views