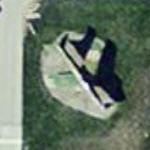 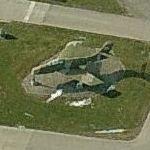 By kjfitz @ 2007-06-10 19:59:18
@ 40.982675, -85.179201
Fort Wayne, Indiana (IN), US
The Republic Aviation Company F-84 Thunderjet was an American-built turbojet fighter-bomber aircraft. Originating as a 1944 United States Air Force proposal for a daytime fighter, the F-84 flew in 1946. Although it entered service in 1947, the Thunderjet was plagued by so many structural and engine problems that a 1948 Air Force review declared it unable to execute any aspect of its intended mission and considered cancelling the program. The aircraft was not considered fully operational until the 1949 F-84D model and the design matured only with the definitive F-84G introduced in 1951. In 1954, the straight-wing Thunderjet was joined by the swept-wing F-84F Thunderstreak fighter and RF-84F Thunderflash photo reconnaissance aircraft.
Links: en.wikipedia.org
604 views