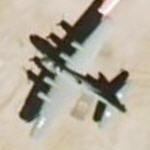 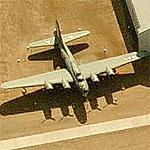 By daggerwell @ 2007-03-11 22:04:55
@ 33.882101, -117.266112
Riverside, California (CA), US
The B-17 “Flying Fortress” was the first production four engine bomber flown by the Army Air Force (earlier: the “Army Air Corps”). During World War II the B-17 flew in every theater, but mostly in the European and Mediterranean theaters. They were also flown, in limited numbers, by the RAF and the Free French. In all, 12,731 B-17s of all models were produced during the period 1935 thru 1945. The “G” model was the most produced model (8,680), and although basically the same as the earlier “F” model, it had a chin turret with two fifty caliber Machine guns and two cheek gun positions each mounting single fifty caliber Machine guns. In all there were thirteen fifty caliber Machine guns mounted in the “G” model B-17.

Operating from bases in England, Italy and North Africa, the “Flying Fortress” participated in the around-the-clock bombing of enemy occupied Europe; the British bombing by night and the Americans by day. The B-17s (and B-24s) carried out their missions from high altitude with a remarkable degree of precision, thanks to the Norden bombsight.

The B-17 had a reputation for being able to absorb horrendous punishment and keep flying; sometimes with severe gashes in their fuselages, or large sections of their wings and tails missing, and many times with only two or three of its engines operating. Lt. Gen. Ira C. Eaker, the pioneer of the Air Force’s strategic bombing progam, said “The B-17, I think, was the best combat airplane ever built.” The B-17 has starred in many a movie: “Command Decision,” “ Twelve O’clock High,” two “Memphis Bell” movies, “Bomber Command,” and others.

B-17 losses, especially over axis Europe were high, but so were training losses and losses due to bad weather. Luftwaffe pilots, usually flying multiple combat missions on a daily basis, wreaked havoc on the massed squadrons attacking axis targets, until late in the war when the Allies gained air superiority. And German anti-aircraft artillery, much of it radar guided, was a threat throughout the entire war, because, once on the bomb run the bombers could not maneuver and evade, so preplanned concentrations of artillery fire (ack-ack) were placed where the Germans knew the bombers had to go. Keep in mind that during WWII every crew member and pilot was a volunteer.

Our B-17 is a “G” model. It was built by Douglas in Long Beach, California, and delivered to the USAAF on 22 July 1944. Its serial number: 44-6393. In August of 1944 it was delivered to the 97th Bomb Group of the 15th Air Force stationed at Fogia, in Italy. It is not known if the aircraft ever flew bombing missions. What is known is that the aircraft was assigned to General Ira C. Eaker, Commander of the Mediterranean Allied Air Force (MAAF), was sent to a depot in North Africa, and was modified to a VB-17 configuration. It was then used by Gen. Eaker as his command aircraft. In that configuration it was without armament and with a plush VIP interior. The aircraft returned to the United States on 10 May 1945 and was stationed at Bolling Field, Washinton D.C. A picture in the museum shows the plane on the ramp at Bolling Field still with its MAAF markings. Its nose art was “Starduster II” Gen Eaker was, at that time, Deputy Commander of the Army Air Force, and it is believed the plane was his personal aircraft until he retired. It was later assigned to various U.S. bases, Manilla, PI, Nanking, China, and Ottawa, Canada. It was kept in the inventory and continued to fly in the USAF long after most B-17s had been scrapped, but in 1956 it was flown to Davis-Monthan AFB, Arizona (the “bone yard”) and dropped from the USAF inventory. In June of that same year it was transferred to the government of Bolivia, the interior was modified to a freight hauling configuration with a cargo door, and it was flown throughout South America for twenty-five years. It was wrecked a number of times and was returned to service using parts from other wrecked Bolivian B-17s. The plane was reacquired by the USAF Museum and flown to the United States in January 1981 for display at the March AFB Museum. This aircraft is on loan from the USAF.

In 1997 a major restoration project was begun on 44-6393 when funds were donated for the purpose by the 97th Bomb Group Association. Thousands of hours of volunteer and staff time have gone into the effort to return this B-17 to its original combat configuration, and restoration of systems, components and various sections of the aircraft continue. Years of neglect had to be reversed as well as the Bolivian “freighter” modifications, although the freight door has been left in the aircraft to aid entry. In the process most of the aircraft interior was stripped back to the frame and the inside was rebuilt to its original July 1944 configuration. Many of the Museum’s volunteers and staff worked on the aircraft, but the on-going effort to complete the restoration is being done by a three man team, Micky Britt, Jerry Stoll and Jim Hendricks. The interior is approaching the point of full restoration with all armament, instruments, systems, and accessories. Fittingly, this surviving member of the WWII combat team has been named “Return to Glory.”

? June 1956 Transferred to the Government of Bolivia, registered as CP-627,

and flown by the Bolivian Government Airline, Lloyd Aereo

were destroyed in crashes).

It flew into March with over 13,000 flight hours.
Links: marchairmuseum.com
1,886 views