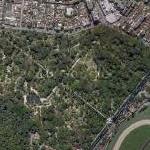 One of the most beautiful and best preserved green areas in the city, the Botanical Garden is an example of the diversity of Brazilian and foreign flora. There are around 6,500 species (some endangered) distributed throughout an area of 54 hectares. The air is free and there are greenhouses.

The Garden also houses monuments of historical, artistic and archaeological significance. There is an important research center which includes the most complete library in the country, specializing in botany with over 32,000 volumes.

It was founded in 1808 by John VI of Portugal. Originally intended for the acclimatisation of spices like nutmeg, pepper and cinnamon imported from the West Indies, the Garden was opened to the public in 1822, and is now open during daylight hours every day except December 25th and the 1st of January.
Links: en.wikipedia.org
480 views