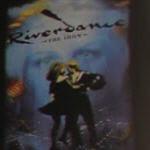 By kjfitz @ 2012-09-26 20:48:01
@ 53.340511, -6.260644
Dublin, Ireland (IE)
Riverdance is a theatrical show consisting of traditional Irish stepdancing, known for its rapid leg movements while body and arms are kept largely stationary. It originated as an interval performance during the 1994 Eurovision Song Contest, a moment that is considered a significant watershed in Irish culture. Riverdance is, in summary form, the story of the Irish culture and of the Irish immigration to America.
Links: en.wikipedia.org
409 views