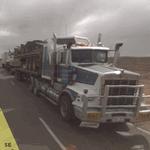 By adrbr @ 2008-08-14 15:27:03
@ -31.02387, 135.797552
Australia (AU)
A road train or roadtrain is a trucking concept used in remote areas of Australia, the United States, and Western Canada to move bulky loads efficiently. The term "road train" is most often used in Australia. In the U.S. and Canada the terms "triples," "Turnpike doubles" and "Rocky Mountain doubles" are commonly used for longer combination vehicles (LCVs). A road train consists of a relatively conventional tractor unit, but instead of pulling one trailer or semi-trailer, the road train pulls two or more of them.
Links: en.wikipedia.org
2,567 views