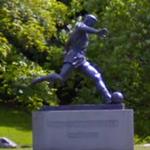 Jensen was born in Bergen and was from an early stage interested in football. He made his Brann senior team debut in 1960, while still only seventeen. He made his debut on the national team the same year. Roald Jensen and Brann won the league in 1961/62 and in 1963. After Brann's relegation in 1964, Jensen transferred to professional football in Scotland and Heart of Midlothian as their first non-British player. While he was in Scotland, Jensen was not able to play for Norway, as the national team did not allow professional players at that time.

In 1971 Jensen returned to Brann and won the Norwegian championship (cup) with the club in 1972. Jensen retired from football after the 1973 season, when he was thirty years old. Jensen died in 1987 while playing football for Brann's old boys team. The Kniksen award, a prize that acclaims the best players in Norwegian football, is named after Roald Jensen. In 1995 a statue of Kniksen was erected outside Brann Stadion in Bergen.
Links: en.wikipedia.org
864 views