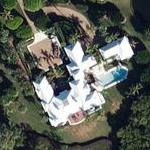 By Champion3 @ 2012-09-25 23:26:17
@ 27.06398888, -80.11950374
Jupiter Island, Florida (FL), US
Robert H. B. Baldwin was the Chairman of Morgan Stanley when the bank was taken public in the 1970s. He is noted for significantly expanding the wealth of the firm during his tenure there. He was also appointed by President Lyndon B. Johnson to be the Undersecretary of the United States Navy during the Vietnam War. The town of Baldwin Park, Florida, and its Lake Baldwin, are named after him, in honor of this service.

Since leaving Morgan Stanley, he has served as the Chairman of the Geraldine R. Dodge Foundation and also as the head of several other charitable entities. A 1942 graduate of Princeton University, Baldwin was awarded the Roper Trophy for his excellence as a three-sport athlete in baseball, basketball, and football during his time at the Ivy League institution. In addition, Baldwin is listed as a lifetime member of Augusta National Golf Club, the home of the The Masters Tournament.
Links: en.wikipedia.org
1,573 views