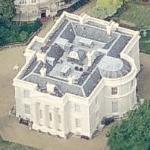 Grove House is said to have one of the largest gardens in central London after Buckingham Palace. The garden runs along the edge of Regent's Canal.
Links: en.wikipedia.org
1,605 views