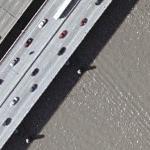 On November 9, 1943 a replacement to the railroad bridge (keeping the old 1903 draw span) was opened. A new northbound highway bridge opened May 9, 1950 halfway between the other two bridges, named the Rochambeau Bridge. The new George Mason Memorial Bridge opened in 1962, replacing the old bridge (then southbound only). The old bridge was finally removed from the site in 1967, and was moved to the Naval Surface Warfare Center, Dahlgren Division for bombing practice. In 1972 a third bridge opened, just downriver from the southbound (Mason) bridge, carrying two express lanes in each direction.
Links: en.wikipedia.org
1,326 views