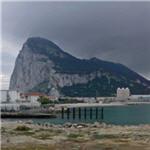 By kjfitz @ 2009-11-11 09:07:30
@ 36.155451, -5.352385
Concepcion, Spain (ES)
The Rock of Gibraltar (sometimes by its Latin name, Calpe) is a monolithic limestone promontory located in Gibraltar, off the southwestern tip of Europe on the Iberian Peninsula. It is 426 metres (1,396 feet) high. The Rock is Crown property of the United Kingdom, and borders Spain. The sovereignty of Gibraltar was transferred to the Kingdom of Great Britain by the Treaty of Utrecht in 1713 after the War of the Spanish Succession. Most of the Rock's upper area is covered by a nature reserve, which is home to around 250 Barbary Macaques - the only wild primates found in Europe. These macaques, as well as a labyrinthine network of tunnels, attract a large number of tourists each year.

The Rock of Gibraltar was one of the Pillars of Hercules and was known to the Greeks as Mons Calpe, the other pillar being Mons Abyla or Jebel Musa on the African side of the Strait. In ancient times the two points marked the limit to the known world, a myth originally fostered by the Phoenicians.
Links: en.wikipedia.org
1,057 views