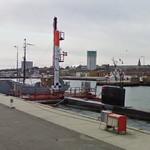 A lot of people went there to see the launch, also the media. But it didn't work because of a bad valve. So the rocket was transported back to Neksø pushed by the submarine that also was made by the rocketeers.