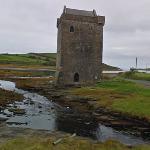 By kuressaare @ 2011-09-04 12:29:00
@ 53.897132, -9.626611
Wilford, Ireland (IE)
This is an interesting example of square defensive tower castle from the medieval/renaissance era . It is one of five along the shores of Clew Bay that are associated with Grace O'Malley, known as Ireland's Pirate Queen. Grace inherited a fleet of boats from her father, Irish sea-faring merchant Dubdara O'Malley. In the late 1500's, when the English began attacks against the Irish and attempted a takeover of Connemara and Clew Bay, Grace expanded her clan's efforts from trade to piracy . Grace would spend summers at the family castle on Clare Island, but in her later years spent her winters at Rockfleet Castle. Located on a narrow but fairly deep inlet of Clew Bay, just north of Newport and Westport, Grace was able to keep an eye on her favorite ship by mooring it just outside the castle and lashing its main rope through her castle bedroom window and onto her bedpost.
Links: en.wikipedia.org
683 views