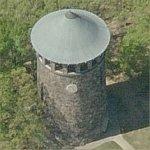 By mlc1us @ 2007-12-23 04:19:45
@ 39.767821, -75.57442
Wilmington, Delaware (DE), US
In 1895, Theodore Leisen, engineer for the Wilmington Board of Park Commissioners, recommended that “a large pavilion and observatory” be built in Rockford Park on what was called Mt. Salem Hill, the highest point in the city at 330 feet above sea level. His proposal coincided with the Board of Water Commissioners’ conclusion that Wilmington was in need of a new water tower in that neighborhood. The two boards merged their projects in Rockford Tower. Built between 1899 and 1902, the half-million-gallon water storage tank and observatory is constructed of natural field stone and is an example of the Italian Renaissance Revival style. Rockford Tower is 57 feet in diameter at the base, 75 feet high to the floor of the observatory, and reaches a total height of 115 feet.
Links: en.wikipedia.org
2,812 views