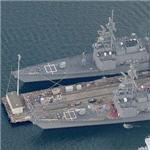 ROCS Tso Ying (DDG-1803) is a Kee Lung class guided-missile destroyer currently in active service of Republic of China (Taiwan) Navy. It was formally commissioned at Suao Naval Base in northeastern Taiwan on November 3, 2006 along with its sister ship the ROCS Ma Kong (DDG-1805). Tso Ying is named after the largest naval base in Taiwan, the Tso Ying Naval Base in Tsoying District, Kaohsiung City at southern Taiwan. The Tso Ying Naval Base is also the location of the Republic of China's naval academy and fleet headquarters. This ship is the former USS Kidd (DDG-993).

The Kidd class destroyers (often called the "Dead Admiral" class or the "Ayatollah" class) are a series of vessels based upon the hull of the Spruance class destroyers. These ships were originally ordered by the Shah of Iran for service in the Persian Gulf in an air defense role.

* The "Dead Admirals" nickname came about because of the USN admirals for whom they are named, all of whom died in combat in the Pacific in World War II.

o USS Kidd was named after Rear Admiral Isaac C. Kidd, who died on the bridge of his flagship, Arizona during the attack on Pearl Harbor on December 7, 1941.

o USS Callaghan was named after Rear Admiral Daniel Callaghan who died at the First Naval Battle of Guadalcanal, November 13, 1942, aboard San Francisco.

o USS Scott was named after Rear Admiral Norman Scott, who also died at the First Naval Battle of Guadalcanal, aboard Atlanta.

o USS Chandler was named after Rear Admiral Theodore Chandler, who died on January 7, 1945, as a result of burns received from a kamikaze crashing into his flagship, Louisville, the previous day.

These vessels were not able to be delivered before the 1979 Iranian Revolution, so they were instead commissioned in the U.S. Navy. Because they were equipped with heavy-duty air conditioning and other features that made them suitable in hot climates, they tended to be used in the Middle East, specifically the Persian Gulf itself. They were all decommissioned from the U.S. Navy in the late 1990s.

In 2001, the US authorized their reactivation and sale to Taiwan. All four have been transferred to the Republic of China (Taiwan) Navy. They were sold for a total price of US$732 million.[1]

The opposition-led Legislature Yuan originally allocated only enough money to purchase half of the SM-2 missiles that the destroyers can carry; a further purchase was included in the 2007 annual budget to ensure all four ships had a full load.
Links: en.wikipedia.org
2,606 views