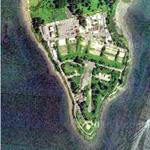 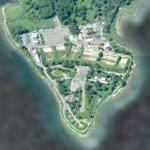 The range is to be re-located to a new police academy in Queens.

Zoom in the BEV view to see major modification at the southern end of the site.