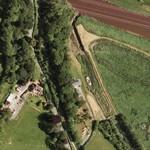 The canal's construction was started as a private venture in 1823 by John Rolle, the then Baron Rolle. In this the canal is unusual as no Act of Parliament had to be obtained. The idea for the canal was originally proposed by his father Denys Rolle but for various reasons nothing had come of those plans. James Green was employed as the lead engineer. The Baron Rolle laid the foundation stone of the aqueduct in an event marked by the firing of a cannon. The cannon burst, resulting in the injury of a man by the name of John Hopgood, who the Baron compensated with a year's salary.

Completed in 1827 it was used to carry limestone and coal for the kilns as far inland as possible and to carry Marland clay to the port of Bideford for export. The canal cost between £40,000 and £45,000 to construct. The canal shared many of its design features with the Bude Canal, unsurprisingly as the Bude Canal had been part of the inspiration for the scheme and the projects shared the same lead engineer. Similarities include the use of trains of tub boats and the use of canal inclined planes rather than locks. The inclined plane was powered by a water wheel. The canal received its water supply from a weir on the River Torridge which also supplied two mills with power.

The aqueduct is referred to as the canal bridge in Henry Williamson's Tarka the Otter.

Around 1852 the canal was leased to George Braginton who among other things held the position of Mayor of Torrington a number of times. Exactly when the lease ended is uncertain but certainly at a date no later than 1865. With the lease ended the control of the canal passed to the then owner Mark Rolle (the nephew of the second wife of John Rolle).

In 1871 the canal was closed and sold to the London and South Western Railway to make way for the railway from Bideford to Torrington. At one point the railway company wished to abandon the project but at Mark Rolle's insistence the railway was built.

Some parts of the canal are still visible today, including the aqueduct (now a viaduct), the sea lock (although without any gates) and some parts of the inclined plane. Part of the railway alignment is now a cyclepath. The Annery kiln lies close to the old canal and can be seen from the Tarka Trail. The canal has been designated a Devon County Wildlife Site.
Links: en.wikipedia.org
3,359 views

Anonymous
@ 2009-12-07 11:06:23
The aerial photo shown is of the tidal lock, known as 'Sea Lock', where the Rolle Canal joins the River Torridge. The inclined plane is a little further along the canal, nearer Great Torrington.