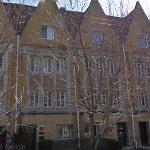 They were listed on the National Register of Historic Places in 1977. They were designated a Chicago Landmark on December 27, 1979.
Links: www.steinerag.com
584 views