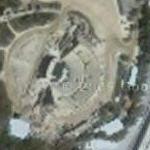 By kjfitz @ 2010-08-05 11:22:02
@ 32.498949, 34.89172
Haifa, Israel (IL)
Caesarea Maritima, called Caesarea Palaestina from 133 AD onwards, was a city and harbor built by Herod the Great about 25–13 BC. Today, its ruins lie on the Mediterranean coast of Israel about halfway between the cities of Tel Aviv and Haifa, on the site of Pyrgos Stratonos ("Strato" or "Straton's Tower", in Latin Turris Stratonis). Caesarea Maritima as with Caesarea Philippi in the Golan Heights and Caesarea Mazaca in Anatolian Cappadocia was named to flatter the Caesar. The city was described in detail by the 1st century Roman Jewish historian Josephus. The city became the seat of the Roman praefecti soon after its foundation. The emperor Vespasian raised its status to that of a colonia. After the destruction of Jerusalem, in 70 A.D., Caesarea was established as the provincial capital of Iudaea Province before the change of name to Syria Palaestina in 134 A.D. shortly before the suppression of the Bar Kokhba revolt. According to historian H.H. Ben-Sasson, Caesarea was the "administrative capital" beginning in 6 A.D. Caesarea remained the capital until the early 8th century, when the Umayyad caliph Suleiman transferred the seat of the government of the Jund Filastin to the newly built city of Ramla.
Links: en.wikipedia.org
1,615 views