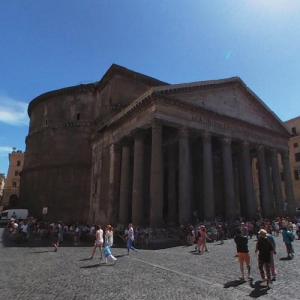 By kjfitz @ 2008-10-29 18:28:06
@ 41.8992659, 12.4771472
Rome, Italy (IT)
The Pantheon is a building in Rome which was originally built as a temple to all the gods of Ancient Rome, and rebuilt circa 125 CE during Hadrian's reign. The intended degree of inclusiveness of this dedication is debated. The generic term pantheon is now applied to a monument in which illustrious dead are buried. It is the best preserved of all Roman buildings, and perhaps the best preserved building of its age in the world. It has been in continuous use throughout its history. The design of the extant building is sometimes credited to the Trajan's architect Apollodorus of Damascus, but it is equally likely that the building and the design should be credited to emperor Hadrian's architects, but not Hadrian himself as many art scholars once thought. Since the 7th century, the Pantheon has been used as a Catholic church. The Pantheon is the oldest standing domed structure in Rome. The height to the oculus and the diameter of the interior circle are the same, 43.3 metres (142 ft).
Links: en.wikipedia.org
828 views