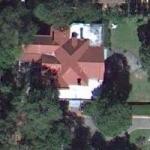 By forthefallendrms @ 2011-08-22 08:09:15
@ 33.498537, -81.970087
North Augusta, South Carolina (SC), US
An example of Beaux Arts architecture, Rosemary Hall was built ca. 1900-1902 by James Urquhart Jackson, founder of North Augusta and an influential leader in the growth and development of the town during the first decades of its existence. Befitting Jackson’s prominence in the community, the structure has elaborate architectural details, including twelve fluted Corinthian columns supporting a wide entablature accented by a frieze of acanthus leaves, Italian colored glass used in the fanlights and sidelights, and rosemary pine paneling throughout the interior. president of the North Augusta Hotel Company, Jackson was influential in the construction of the Hampton Terrace Hotel, a distinguished winter resort that was built in 1903 and attracted such notable guests as John D. Rockefeller and William Howard Taft. As founder and president of the North Augusta Land Company, Jackson directed the purchasing of the land and the laying out of the streets upon which North Augusta developed, leading to the town’s incorporation in 1906.
Links: www.nationalregister.sc.gov
523 views