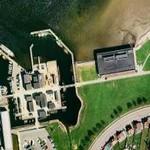 Around the year 1070, five Viking ships were deliberately sunk at Skuldelev in Roskilde Fjord in order to block the most important fairway and to protect Roskilde from enemy attack from the sea. These ships, later known as the Skuldelev ships, were excavated in 1962. They turned out to be five different types of ships ranging from cargo ships to ships of war.