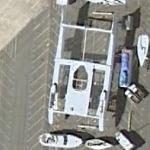 The Morning Light documentary, produced by avid sailor Roy Disney, followed the campaign of a bunch of youth setting out on and sailboat of the same name through the 2,500 mile transPacific yacht race. The Cheyene was re-purposed as a chase boat to provide the ultimate ocean camera platform.
Links: www.solarnavigator.net
851 views