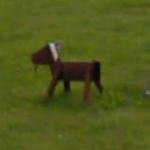 By alfjon @ 2010-05-29 08:31:25
@ 58.406295, 15.580881
Linkoping, Sweden (SE)
A roundabout dog (Swedish: rondellhund, originally Östgötsk rondellhund, "Östergötland roundabout dog") is a form of street installation, which began occurring during the autumn of 2006 in cities and towns all over Sweden, and continued for the rest of the year, with occasional occurrences since. It consisted of anonymous people putting out homemade dog sculptures, typically made of wood (or sometimes plastic, metal or textile) in roundabouts. The phenomenon was reported all over Sweden and also started occurring in other countries, such as Spain after it was mentioned on Spanish television (PuntoDos).[1] Swedish tabloid paper Expressen even placed one at Piccadilly Circus.
Links: en.wikipedia.org
475 views